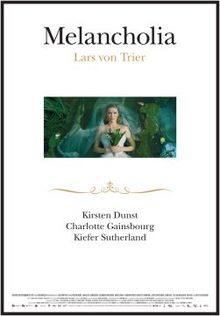 The opening moments of Lars von Trier's Melancholia contain a number of surreal images set against an orchestral score. It looks odd to an outsider of von Trier's work, but not so much to those who have seen at least one of his films.

Justine (Kirsten Dunst) in the first half of Melancholia displays an uncertainty towards her new life as a married woman. It's likely she has a fear of commitment, but it's hard to say. Some view her behavior as erratic, but they don't know what goes on in her mind.

Claire (Charlotte Gainsbourg) is different from her sister Justine. She's much more reserved however she can be uneasy at times as shown in various moments throughout the film. It's during her brief bouts of hysteria that it's Claire who's the more erratic of the two sisters, not Justine.

There's a slightly unsettling aspect of Melancholia in the knowledge that von Trier thought of the premise after a therapy session. (Those Danish directors sure are quirky.) Still, it shows his frame of mind on this sort of subject.

I really liked Melancholia, though I didn't love it as much as Dogville. Maybe because Melancholia got really depressing really fast and Dogville didn't. That said, it's worth a look.