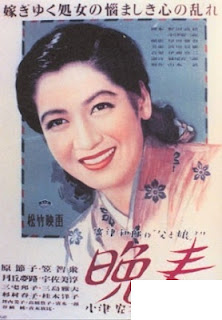 The most famous director of Japanese cinema is Akira Kurosawa. I partly agree with that because Kurosawa is the one Japanese director I'm most familiar with, but this statement could also prevent people from seeing the work of other Japanese directors.

Another great but underappreciated name of Japanese cinema is Yasujiro Ozu. From what I read about him, he was a poet with his films. Being the curious cinephile that I am, I decided to check out one of his films.

The film I checked out was Late Spring. Although not as well known as his magnum opus Tokyo Story, this film is a quiet piece of art. Just watching it made me realize Ozu's status among film devotees.

The story of a father trying to marry off his daughter sounds simple in concept but is grand in execution. The reason? Along with Ozu's direction, it's Yaharu Atsuta's cinematography and Senji Ito's music that make the film come alive. (Boy, what is it about foreign films with great cinematography and music?)

Late Spring is one of the more beautiful post-war films. Ozu really knew how to make a film. Expect to see more musings of his films in the future because I think I found a new director to watch.

My Rating: *****
Posted by MovieNut14 at 11:29:00 PM
Email ThisBlogThis!Share to TwitterShare to FacebookShare to Pinterest
Labels: 1940s, movies, reviews