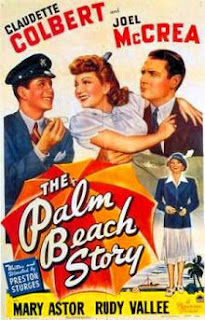 If there was one director who could do screwball comedies the best, that director would be Preston Sturges. I myself have only seen one other of his films (Sullivan's Travels), but I know excellence when I see it.

I opted to see The Palm Beach Story starring Claudette Colbert and Joel McCrea, both actors I previously saw in one other film each. (Colbert in It Happened One Night, McCrea in Sullivan's Travels.) That said, I knew both were very good at what they do.

I saw somewhere that The Palm Beach Story provided some influence for Some Like It Hot seventeen years later. Indeed a few moments in Sturges' film could be viewed as reference points for Wilder's film, but both films and directors' styles are completely different. Still, just felt like bringing that up.

Speaking of directors' styles, I think what made Sturges so notable was that his comedies could be completely over the top and no one would mind. Oh, and the dialogue is so wonderful to hear coming from the actors' mouths. It's just the simple things that make a film fun to watch.

The Palm Beach Story is a very amusing film to watch unfold because you simply don't know what'll happen. The banter between Colbert and McCrea provides some very good entertainment. This is comedy at its finest.

My Rating: *****
Posted by MovieNut14 at 10:37:00 AM
Email ThisBlogThis!Share to TwitterShare to FacebookShare to Pinterest
Labels: 1940s, director: Preston Sturges, movies, reviews