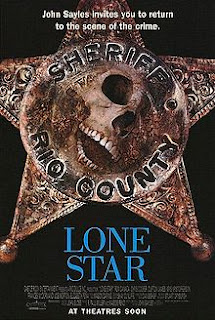 When one has a spotless reputation, it can shock everyone when it's revealed they have a few vices. A family man carrying on an affair. A churchgoer who is abusive. A law-abiding citizen committing murder.

John Sayles' Lone Star provides such a possibility. Sam Deeds (Chris Cooper) lives under the weight of his father's status as the county sheriff, the role Sam now holds. A skeleton is unearthed on the outskirts of town, and Sam starts to believe his father may not have been the upstanding lawman everyone says he was.

Sure, that premise sounds a bit hokey but Sayles makes Lone Star anything but. It's not a strict crime film; it's rather an observation of the many people in one small Texas town. And the way Sayles depicts it in a way so absorbingly, all we can do is watch.

The cast is fantastic. Cooper is great but then again, he usually is. Among the supporting actors are a wonderfully wicked Kris Kristofferson, a surprisingly adept Matthew McConaughey, and a quietly warm Elizabeth Pena. God bless the casting director for choosing these actors.

Lone Star is extremely well done. Along with the actors, there's also a great script by Sayles and lovely cinematography by Stuart Dryburgh. It's really something you shouldn't miss.

My Rating: *****
Posted by MovieNut14 at 2:26:00 PM
Email ThisBlogThis!Share to TwitterShare to FacebookShare to Pinterest
Labels: 1990s, movies, reviews