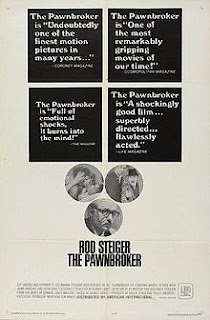 With Sidney Lumet's death last year, we lost one of the undisputed great directors. Not many could make films like him. The most prominent aspect of his films was that he could always get great performances out of his actors.

One such example is Rod Steiger in The Pawnbroker. His character of Sol Nazerman is a square peg in the round hole that is 1960s New York City. He just doesn't fit in the fast pace of the city.

Sol tries to go on with his day without letting the regular flux of customers getting the better of him. The customers don't know of the life Sol led, so they just assume his behavior as unusual. In fact, he has to keep his composure to keep from falling apart.

One aspect of The Pawnbroker that stands out as much as Steiger's acting is Boris Kaufman's cinematography. Kaufman captures the hustle and bustle of both the city and Sol's mind. He also shoots the many gates in Sol's pawn shop as a way of rendering him a prisoner of his own life. Then again, what else do you expect from the same man who shot On the Waterfront?

The Pawnbroker is an underrated title of Lumet's filmography though it's not as great as 12 Angry Men or Network. It starts slow but gradually rises to a decent pace. It also loses something when Steiger's not on screen. Still, it's very much worth a look if you're a fan of Lumet.

My Rating: ****1/2
Posted by MovieNut14 at 11:19:00 AM
Email ThisBlogThis!Share to TwitterShare to FacebookShare to Pinterest
Labels: 1960s, director: Sidney Lumet, movies, reviews