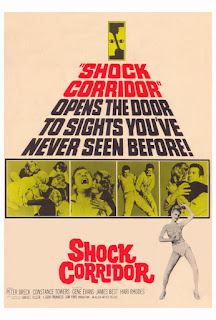 Oh, the things a writer will do for the sake of their own crooked reputation. Chuck Tatum left a man fighting for his life. J.J. Hunsecker got a slander published to ruin a man's reputation.

What did Johnny Barrett (Peter Breck) do for his story? Nothing too out of the ordinary, just having himself committed to a mental hospital. The reason for this? To solve a murder that happened within its walls.

Samuel Fuller provides a very explosive tale in the form of Shock Corridor. Don't expect something in the vein of One Flew Over the Cuckoo's Nest nor a trashy B-movie. This is a film that's a league of its own. (What else do you expect from a film with killer opening lines like this: "My name is Johnny Barrett. I'm a reporter for the Daily Globe. This is my story...as far as it went.")

Of course, for films like this, it's the details that went into it that matter. In this case, one crucial detail is Stanley Cortez's cinematography. The way he shows the dark corners of the human mind is hypnotizing. It's the type of cinematography most films wish they had.

Shock Corridor is, unsurprisingly, a shock to watch. To think a film like this was made in an era of Hollywood where regulations were the norm. This is a film that breaks all the rules, and we have Fuller to thank for it.