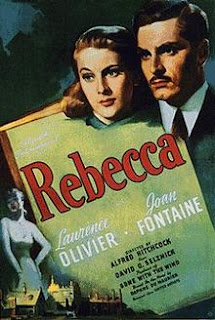 Many people are aware of Alfred Hitchcock being nominated five Oscars and losing each time. What some people probably don't know is that one of his films won the Oscar for Best Picture.

The film in question is Rebecca, which got Hitchcock a Best Director nomination. (The other four in question are Lifeboat, Spellbound, Rear Window and Psycho.) This one is different from some of Hitchcock's later titles because doesn't rely on suspense; it relies on a looming presence.

The looming presence is that of Rebecca de Winter. Her widower Maxim (Laurence Olivier) is haunted by her death, as well as her maid Mrs. Danvers (Judith Anderson). Maxim's second wife (Joan Fontaine) sees what impact Rebecca left behind.

The performances from the three principal actors are fantastic. Olivier just radiates a mysterious allure in Maxim. Fontaine gets the mousy behavior of her character just right. But Anderson is the scene stealer of Rebecca. Her stoic face and dead gaze emulates creepiness. She makes Norman Bates look normal in regards with obsession.

Oh, Rebecca just screams "directed by Alfred Hitchcock". (That's a good thing, of course.) Subtext galore and good-looking actors that are sharply dressed? Yep, Hitchcock. Also, this is probably one of the few times AMPAS got it right for Best Picture. (Just saying.)