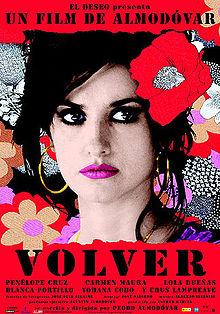 Naturally it takes several films of a director's filmography to get interested in their work. There are also those very few times where I get hooked on a director before meeting the requirement of watching five films.

Pedro Almodovar is one of those few exceptions. I was transfixed by Talk to Her, absolutely won over by All About My Mother and enchanted by Broken Embraces. I pretty much knew I had a new director to watch.

Seeing Volver pretty much sealed the deal. Like All About My Mother, the film revolves around a small group of women. The way some of the characters' lives are written, they sound like they're straight out of a cheesy melodrama. But Almodovar knows how not to steep to that level.

Penelope Cruz, who is dubbed Almodovar's muse, is great here. In films like Vicky Cristina Barcelona, she's viewed as a Spanish sexpot. In the films she does for Almodovar, she shows her abilities as an actress. And boy, does she nail her role in Volver.

Volver is a wonderfully written drama that you don't find often enough. (Thank you, God, for creating Almodovar.) The main actresses, Cruz especially, make these roles their own. And Pedro? You have a new admirer of your work.