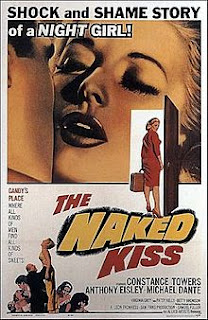 Oh, what better way to open a film than by showing the protagonist beating up another character? In the case of Samuel Fuller's The Naked Kiss, the protagonist is Kelly (Constance Towers) and her target is her pimp.

Kelly changes her career choices and become a nurse. The town where she relocates appears to be a slice of Americana but like Kelly herself, it's hiding a few dark secrets of its own.

Fuller makes no bones about some of the risque material in The Naked Kiss nor does he feel the urge to shy away from it. Like his previous film Shock Corridor, this was made during a restriction-dominated era of Hollywood. Did Fuller give a damn about it? Nope.

Towers is a real firecracker as Kelly. She has morals but they're not what you would expect, especially coming from an ex-hooker. This is the kind of role that was rare for actresses back in the day. And Towers adds to this explosive performance.

The Naked Kiss may not be suitable for everyone, but it sure is a hell of a film to watch. Along with Fuller's direction and Towers' performance, there's also some seductively sleazy cinematography from Stanley Cortez. And to think this was released the same year as My Fair Lady, the very thing one would not describe Kelly.