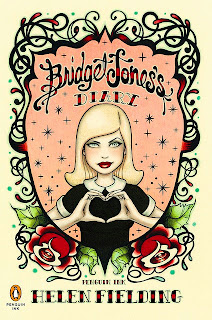 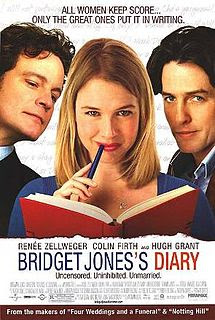 There's always that slightly awkward moment when you can relate with a fictional character. It's not really a bad thing. It's just unusual.

For me recently, it's the title character of Helen Fielding's novel Bridget Jones's Diary. Like Bridget, I too am plagued by a bad single life and people who constantly pester me on one and only one subject. But I don't lead as bad a life as her.

What I like about Fielding's novel is how it's written. Many of Bridget's diary entries are similar to the way I write and think. Finally, a novel that accurately captures the female mind.

Sharon Maguire's movie also captures what Fielding's novel captures with the addition of rightly chosen actors. Renee Zellweger perfectly channels the many frustrations Bridget faces. Hugh Grant plays the ideal sleazy bastard. And, let's be honest. Colin Firth is pretty much the most perfect man alive. (Not much competition since Paul Newman passed away.)

Of course, there are difference between the novel and the movie. The novel is darker compared to the movie's light attitude. The presentation of the characters is very much the same in both. A few scenes in the novel were either altered or omitted in the movie. Still, I liked both of them very much.

What's worth checking out?: I'd go with both.
Posted by MovieNut14 at 9:40:00 PM
Email ThisBlogThis!Share to TwitterShare to FacebookShare to Pinterest
Labels: book vs. movie, directed by women, reviews