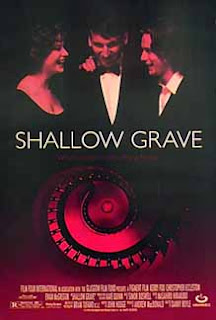 I like Danny Boyle's work. I liked Trainspotting, I thoroughly creeped out by 28 Days Later, and I thought Sunshine was pretty good. It was the stage production of Frankenstein that made me appreciate him more.

I decided to check out his debut Shallow Grave, featuring Kerry Fox, a pre-Doctor Who Christopher Eccleston, and a pre-everything Ewan McGregor. The film is presented as something simple in the beginning but in the span of 93 minutes, Boyle gives his audience a glimpse at how twisted the human mind can become.

There are allusions to the work of Alfred Hitchcock throughout Shallow Grave. Not in the matter of suspense, but rather with the perverse delight a Hitchcock villain can get from their actions. It's a simple touch like that which makes the film all the more alluring to watch.

Of the three main characters, it's Alex (McGregor) and David (Eccleston) who switch their statuses. (Juliet (Fox) is only a witness to the many events that unfold in the film.) Alex is essentially an asshole while David is the quiet target of Alex's jokes, but then David becomes the one in control with Alex and Juliet as his victims.

It may be too dark for some, but I really liked Shallow Grave. You can see the benchmarks of Boyle's other films throughout this (as well as seeing how McGregor became a star from this). Graciously, the Criterion Collection gave Shallow Grave its special treatment, so you have no real reason to pass this up.