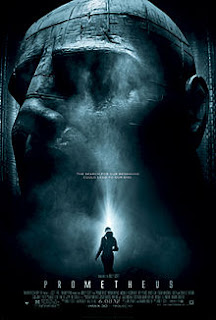 Remember when the news broke that Ridley Scott was making a prequel to his insanely successful Alien? Many opinions towards the story were leaning to the iffy side, but hey. Sometimes the outcome can surprise you.

Prometheus doesn't exactly deliver as well as the film that started it all thirty-three years ago, though it does show that Scott still knows what he's doing after all this time. After all, most sci-fi titles recently only focus on sexy alien chicks and gratuitous violence (and the occasional sex scene). Not in Scott's universe.

One thing the old school sci-fi titles always tend to focus on was the meaning of life and existence. Prometheus does such a thing. It's not exactly the what Stanley Kubrick did with 2001: A Space Odyssey, but what Scott does isn't half bad.

The cast isn't bad either. Noomi Rapace isn't quite like Sigourney Weaver, but she makes the most of her screen time. Charlize Theron and Idris Elba do pretty much the same thing, Guy Pearce just a slight level above them. The MVP of Prometheus has to be Michael Fassbender, who has definitely made a name for himself in a short amount of time.

All in all, Prometheus is quite good but nowhere near the greatness of Alien. The plot holes are slightly bothersome though the actors make up for them more or less. Still, do yourself a favor and wait until it's on DVD to watch it.