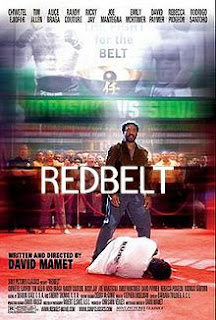 Everyone knows that David Mamet is a great writer. (Hey, you watch Glengarry Glen Ross, and you'll see why.) It's that way of writing that makes him renowned.

His most recent film Redbelt displays the dialogue that Mamet is famous for. It's a sort of natural manner of speaking, but not completely. It displays repetition, which may be irksome to a certain crowd but it works for Mamet because most of his work has a lot going on.

Redbelt is such an example. Indeed it has Mamet's trademark repetition, but the many goings on throughout is a bit of a problem. Mamet tries to balance out them all out evenly but alas, he fails to do so. It's a small complaint to be honest.

The actors of the film are very good, most notably its star Chiwetel Ejiofor. He's one of the few British actors that's not as heavily sought after. (Another is Idris Elba.) He has charisma, looks and, of course, talent, all on display in Redbelt. Hopefully he'll get his due. (Maybe in Twelve Years a Slave?)

Redbelt is a very well-acted film with biting dialogue, but it's how the film is constructed that's the notable flaw. Mamet tries but only succeeds for about 80% of it. Still, it shows Mamet has still got it.

My Rating: ****
Posted by MovieNut14 at 9:32:00 PM
Email ThisBlogThis!Share to TwitterShare to FacebookShare to Pinterest
Labels: 2000s, movies, reviews