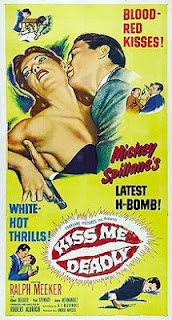 Film noirs from the 1950s pretty much broke all of the ethical rules. Why not since everyone was so paranoid about communism and nuclear warfare? Might as well let Hollywood go a little crazy too.

Robert Aldrich's Kiss Me Deadly is one such film noir. Based on the novel by Mickey Spillane, this has more pulp than an orange. And it's sleazier than anything else the decade had to offer. (Yes, even more than Ace in the Hole and Sweet Smell of Success.)

Many of the sci-fi titles of the 1950s were thinly disguised movies about the Cold War. Kiss Me Deadly also provides that commentary. Aldrich sensationalizes it to the nth degree, and it just works.

Is Kiss Me Deadly an exploitation film? Not really, though it could be viewed as one under certain circumstances. After all, there are no definitive heroes in this, and the villains are just as bad as the "hero" morally.

Kiss Me Deadly is quite good, though it gets to be a bit much after a short while. Bear in mind this was made in a period of Hollywood where happy endings were always expected regardless of what happened in the film. Does Kiss Me Deadly have one? I won't say that, but I will say it's a real doozy of an ending.