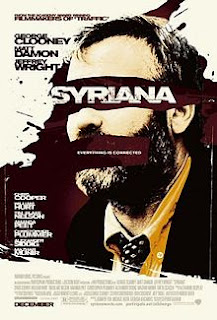 The opening moments of Stephen Gaghan's Syriana depict a small moment of quiet tranquility. No dialogue, just the calm before the storm so to speak.

Seven years later, the subject material of Syriana is still relevant. The subject matter in question? Relations between the United States and the Middle East. It's not as hotly discussed as it was back in 2005, but it's still discussed regardless.

The way Syriana is constructed is done in a style that's now common for many independent films nowadays (ie, Babel, Contagion). That said, the way this film is constructed isn't as well done. You'd think the man who wrote Traffic would be able to pull the same stunt twice.

The cast is quite good. Among the names in Syriana are George Clooney, Matt Damon, Christopher Plummer, Jeffrey Wright and Chris Cooper. They're all solid, but Clooney and Damon are the top performers here.

Syriana is good, but a few flaws among the script prevents it from being great. The cast is good as well. Thanks to Gaghan, he gives his audience insight of a world issue that no one could turn away from (and, in a way, still can't).

My Rating: ****1/2
Posted by MovieNut14 at 9:57:00 PM
Email ThisBlogThis!Share to TwitterShare to FacebookShare to Pinterest
Labels: 2000s, movies, reviews