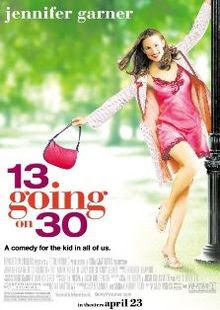 Hey, every now and again I need to watch something light after seeing an assortment of critically acclaimed dramas. A good balance to be honest.

I saw Gary Winick's 13 Going on 30, which some apparently call the female version of Big. Sure, some scenes could be compared to Penny Marshall's movie, but this is a different movie in actuality. A lot cuter too.

I really liked how Jennifer Garner plays her role. It's the way she plays her character of Jenna as a confused teenager in a woman's body. It's a really cute performance from her which, to be honest, is also a rare one nowadays.

Mark Ruffalo is someone I've always liked, especially after his great work in You Can Count on Me. Here in 13 Going on 30, he's the romantic leading man sort of in a similar vein to Jimmy Stewart in The Shop Around the Corner. And honestly, who doesn't like him? He's just one of those actors who's really likable.

I just really, really liked 13 Going on 30. Like I said, getting a light romantic comedy within your viewing schedule of critically acclaimed films is a good thing. This movie provides such a relief from such films. I should do this more often.

My Rating: ****
Posted by MovieNut14 at 1:44:00 PM
Email ThisBlogThis!Share to TwitterShare to FacebookShare to Pinterest
Labels: 2000s, movies, reviews