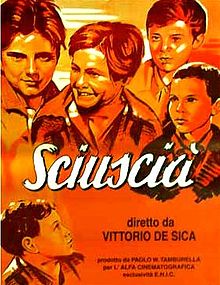 There are three eras in the world of film that are widely celebrated. There's the New Hollywood era, which introduced audiences to the likes of Scorsese, Coppola and Spielberg. The French New Wave got Godard, Truffaut and Chabrol recognized. The Italian neorealism era had filmgoers going, "Buongiorno!" to Fellini, Rossellini and Visconti.

Another prominent director of the latter era was Vittorio De Sica. His most famous work (and the most prolific film from that era) was The Bicycle Thief, a beautiful and devastating piece of art. Two years earlier, De Sica made Shoeshine, which is perhaps even more devastating than his magnum opus. Why? Its protagonists are children.

Giuseppe (Rinaldo Smordoni) and Pasquale (Franco Interlenghi) are very close friends and witnesses to poverty in war-era Italy. Soon they find themselves in police custody for a crime they had no involvement in. As they spend more time behind bars, their friendship slowly starts to crumble.

The fact that the main characters for Shoeshine are children gives the film a compelling perspective. Their innocence is projected in every scene in a nice, delicate balance rather than in overindulgence. Oh, if more directors did that task, that'd be super.

Shoeshine is just a very heartbreaking film. (If you don't believe me, just read Pauline Kael's thoughts on it.) Honestly, tissues might be needed throughout.