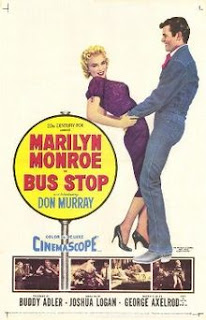 Marilyn Monroe is always regarded as the sex symbol. But like many stars of Hollywood's Golden Age, her real image was very unlike her screen image.

In many of her films, she tended to play the ditsy blonde as shown in How to Marry a Millionaire and All About Eve. But a number of her later films like Some Like It Hot and The Misfits showed Monroe as a vulnerable woman, which was what she was. It was when she did the latter role that got people talking.

Monroe's work in Joshua Logan's Bus Stop falls into the latter category as well. After all, when we first see Cherie, she's being manhandled by a number of ogling men. It's not the first time it has happened to her and after meeting Bo (Don Murray), it won't be the last time either.

Cherie is similar to Sugar Kane. Sugar has a bad history with a number of men. Cherie only had a few sloppy affairs, but it's who she had them with that makes them stand out. Bo is like one of her many botched flings. Sounds like heaven, but it's actually hell. (Also, the moment when Cherie speaks of what she looks for in a man wasn't Cherie speaking. It was Marilyn.)

Bus Stop in toll is pretty good. You really feel for Cherie once we see her and you don't stop. The ending kind of spoils the mood of the rest of the film, but Monroe stays vibrant throughout. You have to admire an actress like Marilyn Monroe.