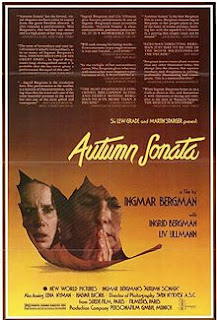 When an actor performs their swan song, it's usually rare for it to match that of their more famous work. When it does, it's practically a miracle.

One example is Ingrid Bergman in Ingmar Bergman's Autumn Sonata. Two of Sweden's finest contributions to the world of film working together. And boy, what they do together sure is mesmerizing.

Autumn Sonata also stars Liv Ullmann, a regular of Ingmar's. She was thoroughly impressive with her almost mute performance in Persona. Here in Autumn Sonata, she speaks of her emotional pain through her words and face. It's a great performance from Ullmann, though I'm more fond of her work in Persona.

The fact Ingrid still looks gorgeous in her later years is a crime in itself. Throw in the fact she's still giving great performances towards the end of her life, and you know why she's ranked among the greats of the silver screen. Here, she doesn't express her regrets of her past, but you can definitely tell she can feel it.

Autumn Sonata is very hypnotizing in its subject matter. Most films about the same matter tend to sugarcoat everything. Like Ingmar is interested in that. Definitely one of the best titles from the 1970s.