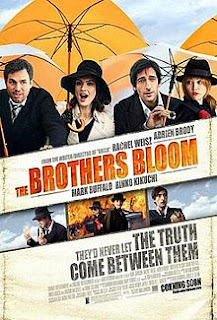 Rian Johnson was introduced to the film industry in the form of the neo-noir Brick. Later this year, his third film Looper will be released. But what did Johnson do between these two films starring Joseph Gordon-Levitt? The comedy crime caper The Brothers Bloom.

Starring Adrien Brody, Mark Ruffalo, Rachel Weisz and Rinko Kikuchi, the film is a throwback to heist films of the 60s and 70s. (Johnson cited The Sting as an inspiration, and Paper Moon as an influence.) Though its style is more reminiscent of Wes Anderson's work than that of Brick.

The fact that Johnson got three Oscar winners (Brody, Weisz, Maximilian Schell), an Oscar nominee (Kikuchi) and a future Oscar nominee (Ruffalo) in his cast is interesting. Bear in mind Brick had a number of unknowns in its cast, so getting a roster of actors like that is impressive, especially for a sophomore effort. (Then again, the scope of names Steve McQueen got for his third film Twelve Years a Slave is fucking amazing.)

Just a small observation. It's amusing that the four leads look like they just came from a magazine photoshoot. If I had to say which ones, it would probably be GQ for Brody and Ruffalo, maybe Harper's Bazaar for Weisz, and maybe an alternative fashion magazine for Kikuchi. (I'm not very good at naming fashion magazines.)


The Brothers Bloom is very clever, a rarity among films nowadays. The actors play their parts fantastically. This is one of those films that gets more and more fun with each viewing...at least that's what I'm told.


My Rating: ****1/2
Posted by MovieNut14 at 10:27:00 AM
Email ThisBlogThis!Share to TwitterShare to FacebookShare to Pinterest
Labels: 2000s, director: Rian Johnson, movies, reviews