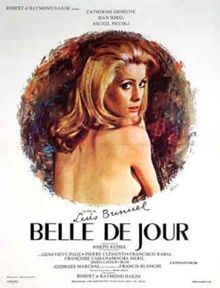 This is just an odd habit of mine. If there's a prominent director whose work I haven't seen yet, I will find a notable film of theirs and watch it. (This is why I never feel embarrassed when talking about directors.)

One of my latest conquests was Luis Bunuel. I heard of a lot of his films, but had never really set out to see any of them. (I was more or less acquainted with Bunuel from his "appearance" in Midnight in Paris.) I knew I had to see a film of his sooner or later, so I did that.

The film in question is Belle de Jour starring Catherine Deneuve in what many call her best work as an actress. And it's also a doozy of  a film. (What else do you expect when the film opens with the leading lady fantasizing about being beaten and raped?)

Deneuve is a marvel to watch. Like her work in Repulsion, her character's face remains blank throughout regardless of what is said to her. It just leaves you wondering what exactly is running through that mind of hers.

Belle de Jour possesses both class and surrealism, which from what I heard is Bunuel's filmography in a nutshell. Deneuve is alluring both looks-wise and acting-wise. I see why this is an essential among art lovers.

My Rating: *****
Posted by MovieNut14 at 11:04:00 AM
Email ThisBlogThis!Share to TwitterShare to FacebookShare to Pinterest
Labels: 1960s, movies, reviews