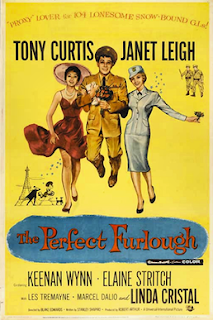 Blake Edwards' The Perfect Furlough introduces Lt. Vicki Loren (Janet Leigh) in a way that's par for the course for films of the era: legs first. Shortly thereafter, we witness the arctic base Loren's team of psychiatrists is assigned to look after slowly going insane from the isolation, pin-ups on nearly every wall. As expected for an Edwards comedy, libido is the picture's driving force.

But what's this "perfect furlough" in question? The men at the base suggest being in Paris with movie star Sandra Roca (Linda Cristal). With a bit of scheming, Cpl. Paul Hodges (Tony Curtis) is the one that goes on furlough but thanks to his "record", Loren has to look after him. But what will ensue once in Paris?

With a script by Stanley Shapiro (who'd write the next Edwards and Curtis picture Operation Petticoat), there's a boatload of lines that just skirt past the censors of the day. (Having Elaine Stritch amongst the cast helps too.) Playing with Edwards' penance for visual gags, they make a strong combination. (It's a shame they didn't collaborate more.)

Being a picture starring real-life couple Curtis and Leigh (the fourth of five, and one of two from 1958), it's patently obvious that they'll end up together before the credits roll. But even with that in mind, it's interesting to see their screen personas interact. She's strait-laced to his freewheeling but as they spend more time together, she relaxes and he calms down. (One wonders if their marriage was similar; probably not, seeing as they divorced four years later.)

The Perfect Furlough is top-tier Edwards (the final third is where it loses steam) but it still holds up today. If there's one thing to take away from this, it's that you see Edwards making his bones in traits that are more prevalent with his comedies in the coming decade. (Mind you, they're more restrained than what was to come.) 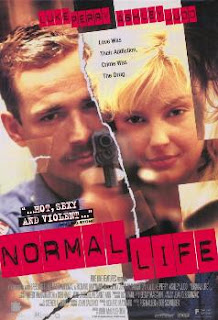 The opening moments of John McNaughton's Normal Life take the viewer through the average American small town. Suburbs, strip malls, the like. Then we see Chris (Luke Perry) and Pam Anderson (Ashley Judd) get swarmed by police cars, and that's when the mayhem unfolds.

We then cut back two years to when Chris and Pam first met. Almost immediately, the quiet Chris is drawn to the volatile Pam but it quickly becomes clear that Pam is nigh-unpredictable, which causes concern to those close to Chris. But their happiness (and finances) quickly dwindle after getting married, and Chris takes drastic measures to fix this.

Being based on real events (albeit with changed names), Normal Life was a stark contrast to what audiences knew Perry from. (Test audiences were expecting something more like Beverly Hills, 90210 but got something else entirely; what else would you expect from the man responsible for Henry: Portrait of a Serial Killer?) And Perry more than proved himself beyond his Dylan McKay image. It's a shame he passed away last year; he had more to offer.

Similarly, it's frustrating to watch Judd here with the knowledge that her career would suffer a setback "thanks" to Harvey Weinstein (the following year, no less!). But even with that in mind, she's dynamite in this. Like she would in Bug the following decade, she's unafraid to take on such a role.

Normal Life is a damn good picture, the kind you don't really see made much nowadays. (What has McNaughton been up to lately?) Sure, it might've gotten lost in the shadow of Wild Things two years later but that shouldn't discourage you from seeking this out.

My Rating: ****1/2
Posted by MovieNut14 at 4:20:00 PM 1 comment:
Email ThisBlogThis!Share to TwitterShare to FacebookShare to Pinterest
Labels: 1990s, movies, reviews 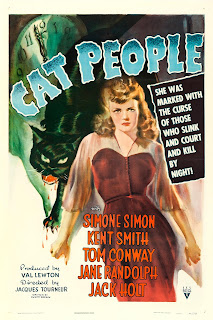 There's something that's fascinating about fiction focusing on sexual matters that's made before talking about them was socially acceptable. The innuendos may have skirted past the censors of the day but perhaps not its audiences. And boy, they can still pack a punch.

Jacques Tourneur's Cat People in particular has this under the guise of a horror noir. The marriage of Irena (Simone Simon) and Oliver (Kent Smith) seems to be strained almost immediately, stemming from the fact it hasn't been consummated. Irena has an almost crippling fear of sexuality and she cites folklore from her home country as the reason. But are Irena's fears warranted?

As Tourneur would do several years later with Out of the Past, the way shadows are used in Cat People play just as much of a role as the story itself. Similarly, in contrast to Jane Greer's first appearance in all white in the later film, Irena has an all-black wardrobe, signifying -- per Hollywood symbolism -- there's more to her than she's letting on...

Being the first collaboration between Tourneur and producer Val Lewton, both had an interest in the psychological elements of storytelling, which is all over the place in Cat People. With the world at war yet again, it was only a matter of years before the rest of Hollywood followed suit. And as various titles over the coming decades showed, they were onto something.

Cat People is a different breed of horror film, no denying that. Rather than outright scares, it prefers having its audience get a creeping feeling of unease like its characters. (Is it any wonder that Lewton inspired elements of Kirk Douglas' character in The Bad and the Beautiful?) 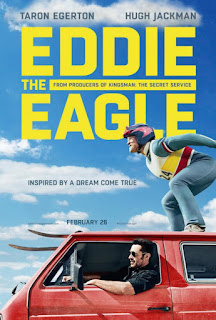 In this time of constant strife, one's always looking for a means of escape. They're looking for something to feel good about, a light amid this darkness. And sometimes, it's in the form of an underdog story, especially a real-life one.

Dexter Fletcher's Eddie the Eagle is such an example as it tells the hardships Michael "Eddie" Edwards (Taron Egerton) faced as he worked to the fullest in getting to the Winter Olympics. Most think Eddie's wasting his time in pursuing such an endeavor but he carries on nonetheless. But will Eddie manage to win his doubters over?

There's a certain undercurrent of classism throughout Eddie the Eagle. Those that sneer at Eddie's ambitions tend to sport the upper-class accents which make the derision towards him all the more biting. They believe that being from a place of better privilege entitles them to have all the better perks in life, not some bloke from a working-class household. (Annoyingly, it's still the case today...)

Within the past few years, Egerton has more than proven his worth as a performer, and Eddie the Eagle is more than a fine example of such. He has an easy charm, the kind that has you being supportive of him almost immediately. It just makes all the hard blows (both physically and emotionally) Eddie endures all the tougher.

Eddie the Eagle may not have all the facts of real life on display but it's charming nonetheless. Sure, there's the standard cliches found in sports movies (most tellingly the former pro turned disgruntled alcoholic) but that's minimal in the long run. And both Fletcher and Egerton have strong careers ahead of them should this streak continue.

My Rating: ****
Posted by MovieNut14 at 12:05:00 PM No comments:
Email ThisBlogThis!Share to TwitterShare to FacebookShare to Pinterest
Labels: 2010s, movies, reviews
Newer Posts Older Posts Home
Subscribe to: Posts (Atom)
All reviews are on a scale of five stars.