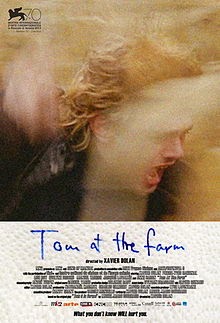 My Rating: *****
Posted by MovieNut14 at 8:16:00 AM No comments:
Email ThisBlogThis!Share to TwitterShare to FacebookShare to Pinterest
Labels: 2010s, director: Xavier Dolan, movies, reviews 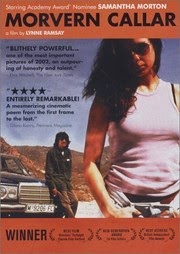 The opening moments of Lynne Ramsay's Morvern Callar show the title character (Samantha Morton) caressing the body of her boyfriend who's committed suicide. The following scenes have her behaving as if nothing had happened. (She does have the occasional moment of silent grief.)

She and her friend Lanna (Kathleen McDermott) go to Spain as a means of personal escape. It's during this sudden vacation that Morvern makes an emotional discovery. Amid the debauchery, she realizes what she must do.

Morvern behaves in a similar manner to that of Eva, the protagonist of Ramsay's follow-up film We Need to Talk About Kevin. Both recently suffered personal tragedy and they try to carry on with their everyday lives. Though both face different reactions from others (Morvern innocent questioning, Eva vicious persecution), they end up as different people as a result. Very rarely is such a thing depicted in fiction for female characters.

A small detail of Morvern Callar is how the backdrops of the film are set up. Glasgow is featured in a muted palette whereas Spain is shown in a much brighter light. Clearly a way to establish the change in mood but Ramsay does it in a way that's effortless.

Morvern Callar is good though not as great as Ramsay's next film. Morton is also good (though she usually is regardless). All in all, you rarely see a female-led (or even female-directed) film focused on such a complex lead. More films like this please, Hollywood.

My Rating: ****
Posted by MovieNut14 at 10:31:00 AM No comments:
Email ThisBlogThis!Share to TwitterShare to FacebookShare to Pinterest
Labels: 2000s, directed by women, director: Lynne Ramsay, movies, reviews 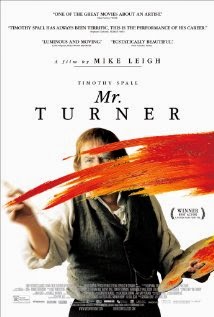 2014 saw the release of many films revolving around real-life people. The prominent (Selma, The Theory of Everything), those forgotten by history (The Imitation Game, Belle) and the recently living (Wild, American Sniper), it was a menagerie of (mostly) factual stories.

So where does Mike Leigh's Mr. Turner rank? Indeed, its subject matter of British artist J.M.W. Turner is not someone many people know of like Monet, van Gogh or Picasso. But Turner's work is easily memorable once one has seen it. (He isn't known as "the painter of light" for nothing.)

In the role of Turner is Timothy Spall, a regular name among Leigh's films. Here, he delivers the performance of his career. Spall portrays Turner as a multi-faceted personality, a man of many triumphs and flaws. It's a role that's once in a lifetime for an actor, and Spall gives it his all. (Erm, that rhyme wasn't intended.)

It simply must be mentioned that the cinematography from Dick Pope is stunning. Every shot looks as if Turner's paintings had come to life. (That's a common thing, isn't it? Films about people making beautiful things having been gorgeously shot?) Combine it with the Suzie Davies and Charlotte Watts' production design and Gary Yershon's score, and it makes for an absolutely striking film.

Like Topsy-Turvy, Leigh proves with Mr. Turner that he can make a great costume drama. All of its elements work wonderfully, something not frequently seen in contemporary films. It's a film that people should see.

My Rating: *****
Posted by MovieNut14 at 11:34:00 AM No comments:
Email ThisBlogThis!Share to TwitterShare to FacebookShare to Pinterest
Labels: 2010s, director: Mike Leigh, movies, reviews 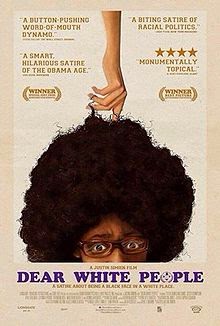 We supposedly live in a "post-racial" society. Yeah, right. Considering the number of unarmed black people murdered by people who don't have the right frame of mind to even own a gun, it's clearly a claim of utter bullshit.

Justin Simien's Dear White People showcases said bullshit to the fullest. You'd think by now we'd be in an unbiased society. But Simien shows how far we've yet to come. (How much longer we'll be in this sociological rut is hard to say at the present moment.)

Though the film's a satire, Dear White People hits a lot of points. It highlights how little progress has been made over the years when it comes to race relations. How much longer we'll be living in such a society is anyone's guess.

Dear White People also manages to eschew stereotypes for the main characters. The film does what most films tend to ignore: depict people without prejudices. (That said, the depiction of those frat boys could easily be likened to the average comments section of any given article.)

It doesn't work 100% of the time but Dear White People has one hell of a bite. It also raises the question that's been on many people's minds for years: when will we live in a society that's completely equal and free of prejudice? Hopefully it'll only be a matter of time...

My Rating: ****1/2
Posted by MovieNut14 at 10:34:00 AM No comments:
Email ThisBlogThis!Share to TwitterShare to FacebookShare to Pinterest
Labels: 2010s, movies, reviews 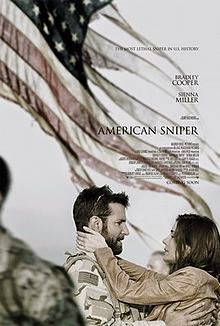 Clint Eastwood's American Sniper is a film with many discussion points. Is it a film that objects war or glorifies it? Does it depict post-traumatic stress disorder properly? And finally, does the film depict Chris Kyle as a war hero or a cold-blooded sociopath?

Eastwood himself is familiar with the war movie genre, both as an actor and a director. So where does American Sniper place? Much like The Deer Hunter and The Big Red One, it focuses on the horrors of war and its effects on people. But unlike Michael Cimino and Samuel Fuller's films, American Sniper revolves more around the brutality than the aftermath.

That said, however, American Sniper does manage to highlight post-traumatic stress disorder when it's required. It depicts it in a low-key manner (none of the flashback nightmares frequently shown in fiction), but even then it doesn't feel like it's been done properly. (Then again, you can't have everything.)

Starring as Kyle is Bradley Cooper, who in recent years has established himself as a serious actor. But how does Cooper depict Kyle? By many means, he depicts Kyle not as someone with a blood lust but rather as someone who feels that he's doing is merely to protect his country. It's simply something that happens in both real life and fiction.

American Sniper has its flaws, certainly, but it has its moments as well. (Admittedly most of them are courtesy of Cooper's work.) It's not great like Letters from Iwo Jima (it's more like Flags of Our Fathers) though again, it does shine in spots. Had the script been modified considerably, the film would probably rank among the greats. (Key word is "probably".)

My Rating: ****
Posted by MovieNut14 at 4:09:00 PM No comments:
Email ThisBlogThis!Share to TwitterShare to FacebookShare to Pinterest
Labels: 2010s, director: Clint Eastwood, movies, reviews
Newer Posts Older Posts Home
Subscribe to: Posts (Atom)
All reviews are on a scale of five stars.