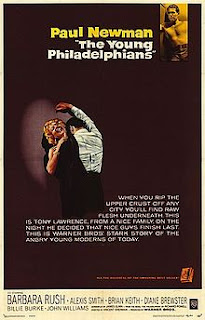 The opening scenes of Vincent Sherman's The Philadelphians provide the backdrop of a possible scandal. Fortunately for those involved, it goes unnoticed by the public and stays unnoticed.

Fast forward to many years later. Tony Lawrence (Paul Newman) is part of a prominent Philadelphia family. He also shows promise as a lawyer. The duration of The Young Philadelphians depicts Tony's rise to the top as a lawyer.

The film also shows the many personal dilemmas Tony encounters, many of them involving women. Either he rejects them or they reject him. It feels unnecessary to be honest, but this is from 1959. Romantic problems of the main characters were practically a requirement back then.

In regards with the acting, there's some notable work from the supporting cast. The most notable work is from Robert Vaughn, who plays the black sheep of another prominent family. But this show belongs to Newman. After all, this man made acting look easy.

The Young Philadelphians is good, but its running time of 136 minutes is 20 minutes too long. Newman is very good but then again, he almost always is. Appearing to be a courtroom drama laced with scandal, it actually pales in comparison to Anatomy of a Murder released the same year. However, if you like this sort of film (or, more specifically, Paul Newman), then it's worth a look. That said, it's not too memorable.

My Rating: ****
Posted by MovieNut14 at 8:01:00 PM
Email ThisBlogThis!Share to TwitterShare to FacebookShare to Pinterest
Labels: 1950s, movies, reviews