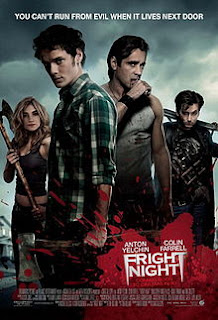 There are two types of vampires: the brooding, slightly handsome type and the purely evil type. What category does Jerry Dandrige (Colin Farrell) of Craig Gillespie's Fright Night fit into? Thankfully the latter category. (Though he does fit a little into the former category too.)

Of course, playing a vampire relies more than just having a pretty face. An actor has to be able to play someone with a complete disregard for human life. Farrell does just that with a touch of devilish charm. Also, is it bad to be attracted to a vicious killer?

Anton Yelchin provides some amusement as the main character of Charley Brewster. However, the way Charley is written is the typical teenager found in a horror movie: wants to get laid, confused by the regular moments in his life, things like that. Still, Yelchin makes the most of his role.

For me, I was thoroughly entertained by David Tennant as Peter Vincent. I think it was the thought of seeing The Doctor as a goth vampire expert that made it amusing. He traded in the brown suit and Converse high tops for leather and guyliner. (Honestly, that ass in low-cut leather pants. Yum.)

The main appealing factor of Fright Night is the fact that it doesn't take itself seriously. That's what makes it so amusing. There are gaps in the story, it gets ridiculous towards the end...who cares? Just watch for some spooks and laughs.

My Rating: ****
Posted by MovieNut14 at 1:53:00 PM
Email ThisBlogThis!Share to TwitterShare to FacebookShare to Pinterest
Labels: 2010s, movies, reviews