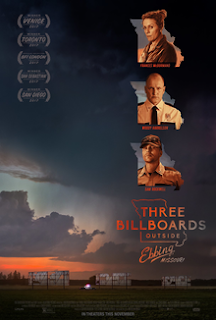 Martin McDonagh's Three Billboards Outside Ebbing, Missouri opens on the titular structures, decrepit after years of neglect. Mildred Hayes (Frances McDormand) drives past them one day and she rents them out shortly after. Her purpose for them? To keep the investigation into her daughter's rape and murder alive.

Much like McDonagh's earlier works, Three Billboards Outside Ebbing, Missouri features both a pitch black sense of humor and loads of bloodshed. But more often than not, the latter actually has some relevance to the plot. The reason? It embodies the internalized anger of the story's characters.

And boy, is it angry. Like many non-American directors before him, McDonagh doesn't shy away from the fact that the land of opportunity isn't as ideal as it likes to depict itself as. It's a country of skewed priorities, and the face that it has to be pointed out says everything right there.

Also like McDonagh's previous films, the cast of Three Billboards Outside Ebbing, Missouri is a solid one. Alongside McDormand are the likes of Sam Rockwell, Woody Harrelson, Lucas Hedges, John Hawkes, Abbie Cornish, and Peter Dinklage. All are great (though Cornish is underused like she was in Seven Psychopaths) but this is McDormand's show easily.

Three Billboards Outside Ebbing, Missouri is certainly not for everyone. The matters of race, police brutality and moral redemption zigzag enough times between being the main focus and as a B-plot to make your head spin. On a writing standpoint it's all over the place but (some of) the actors keep it grounded.

My Rating: ****1/2
Posted by MovieNut14 at 4:10:00 PM
Email ThisBlogThis!Share to TwitterShare to FacebookShare to Pinterest
Labels: 2010s, movies, reviews