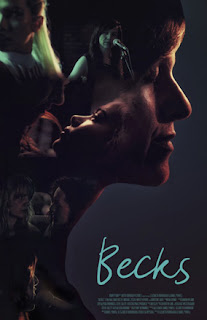 Life is full of ups and downs, regardless of the person involved. One's luck could be another's misery, and so it goes. But even then such luck is fleeting.

The titular character (Lena Hall) of Elizabeth Rohrbaugh and Daniel Powell's Becks goes through this repeatedly. After a nasty breakup, she moves back in with her devout mother Ann (Christine Lahti). As she settles back into small-town life, she offers guitar lessons to make some money and she gets close to her student Elyse (Mena Suvari).

Similar to Desert Hearts decades earlier, Becks depicts lesbian relationships not as something that's carefree (or for the sake of male viewership) but rather as ones that are just as complicated as straight ones. Infidelity, personal hangups, how society perceives them...none of these liaisons are without their flaws.

Now what Becks and Elyse go through is a little more complicated than what we've seen before. How so? Well, Elyse is a married woman, for starters. (Becks meanwhile has something of a drinking problem, a flaw her mother strongly disapproves of.) But as the end of Some Like It Hot claims, nobody's perfect.

Becks follows similar tropes found in similar works but Hall and Suvari (who had more or less disappeared after American Beauty) surely make up for those slight faults. In this time of homophobia regularly cropping up in daily life, it's nice to see those (albeit fictional) works where the characters are unashamed of who they are. This is something we should be seeing more often, both in fiction and in real life.

My Rating: ****
Posted by MovieNut14 at 10:59:00 AM
Email ThisBlogThis!Share to TwitterShare to FacebookShare to Pinterest
Labels: 2010s, directed by women, movies, reviews