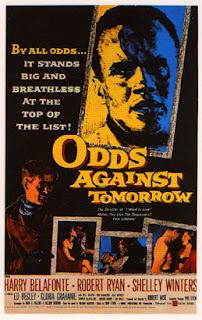 The morality of people is something that can provide solid fodder if used properly. What can cause someone to betray both their beliefs and those close to them? And do they revert back to their old ways?

Robert Wise's Odds Against Tomorrow has this as the main dilemma for Johnny Ingram (Harry Belafonte). A family man with gambling debts, he reluctantly agrees to help David Burke (Ed Begley) in a bank robbery upstate. But co-conspirator Earl Slater (Robert Ryan) balks at working with someone who's black.

Naturally the main focus of Odds Against Tomorrow is the robbery but after nearly sixty years, what stands out is the depiction of race. Being released before the civil rights movement's peak, the matter was (and still unfortunately is) a hot-button topic. After all, actors like Belafonte (read: black) were just beginning to move away from servant roles and other stereotypes.

Similarly, there's a point in Odds Against Tomorrow where Johnny finds his wife hosting a PTA meeting in their home. He's offended that she's trying to behave more white. Usually such disgust towards another race has someone who's Caucasian expressing it (at least as far as fiction goes). It's not that common for someone non-white behaving that way. (In real life, however....)

Odds Against Tomorrow proves that while Wise is more known for West Side Story and The Sound of Music (and to some Star Trek: The Motion Picture), he certainly knew what to do with more serious material. (Adding to the film's noir ambiance are Shelley Winters and Gloria Grahame in supporting roles.) And man, Belafonte should've been a bigger name in Hollywood. (He was obviously a very talented man.)

My Rating: ****
Posted by MovieNut14 at 8:27:00 AM
Email ThisBlogThis!Share to TwitterShare to FacebookShare to Pinterest
Labels: 1950s, director: Robert Wise, movies, reviews