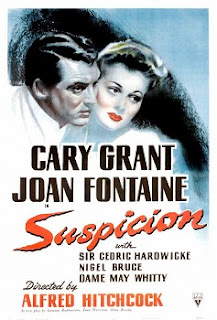 Ah, the charming cad. A regular staple of many films from Hollywood's Golden Age. There's something about those characters that can provide a deep fascination.

And Johnnie Aysgrath (Cary Grant) of Alfred Hitchcock's Suspicion fits the bill for this character type. Lina McLaidlaw (Joan Fontaine) becomes smitten by him but after she marries him, she finds out that he's got a nasty gambling habit and constantly in debt. And she starts fearing he's capable of darker deeds.

This being Hitchcock's first of four films with Grant, it's interesting to see the famed collaboration blossom. (After all, the director gave the actor some compelling roles to sink his teeth into.) And with Suspicion, Grant subverts his usual charming leading man role for something that can be truly menacing at times.

And what of Fontaine? Reuniting with Hitchcock after the success of Rebecca, she plays a role similar to hers in the earlier film. But Lina isn't like the second Mrs. de Winter; she actually has an inkling that her husband isn't who he claims to be.

Though often lost in the shadow of the previous Hitchcock/Fontaine collaboration, Suspicion still holds up all these years later. Sure, there's the occasional similarity to Rebecca (ironic, no?) but it's far from the Gothic romance the earlier film is. It's instead perhaps a more cautionary tale being careful with first impressions. (Such a notion can very well save your life.)