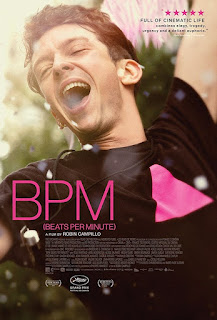 The HIV/AIDS crisis was a pivotal moment for both the LGBT+ community and the medical world. Here was a disease that was practically a death sentence for those who contracted it, and people fought vigorously for proper treatment (both medically and emotionally). But such fighting tends to get glossed over.

Robin Campillo's BPM (Beats Per Minute) follows such fights against a backdrop of 1990s Paris. Revolving around a group of ACT UP activists, it follows their attempts to get more people to know what's slowing killing some of them. Their actions are aggressive (but not violent), many times to garner some publicity.

Campillo and co-writer Philippe Mangeot were both involved in ACT UP so they drew on personal experience for BPM (Beats Per Minute). They depict the organization as one not aiming to be a martyr but instead wanting to stop seeing friends and loved ones as statistics for the death toll. (And different from similar works, women play just crucial a role as the men.)

BPM (Beats Per Minute) is a far cry from other AIDS-themed works like Longtime Companion and Philadelphia. Its afflicted characters don't just lay down and die following such a diagnosis; they fight back with the sort of ferocity usually reserved for war movies. In short, seek this out.

My Rating: *****
Posted by MovieNut14 at 10:36:00 AM
Email ThisBlogThis!Share to TwitterShare to FacebookShare to Pinterest
Labels: 2010s, movies, reviews