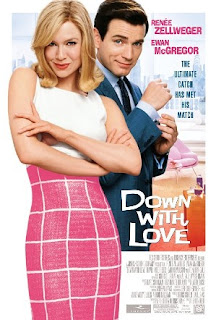 The very moment Peyton Reed's Down with Love begins, it's clear that it'll be a pastiche of the many romantic comedies of the 50s and early 60s. (It uses the 20th Century Fox logo from that time.) And that's only the start of it.

As Barbara Novak (Renée Zellweger) sparks a feminist revolt with her titular book, reporter Catcher Block (Ewan McGregor) is convinced that Novak doesn't firmly believe in what the book presents. To prove it, he seeks out to seduce her. But plans like this often don't go without a hitch (so to speak).

Both Zellweger and McGregor had proven their bankability prior to Down with Love (she with Bridget Jones' Diary, he with the Star Wars prequels) so obviously this should work out. And boy, does it ever. (Hopefully the two actors will do another project like this.)

Also of note in Down with Love are supporting actors David Hyde Pierce and Sarah Paulson, who also have excellent chemistry together. Though both are more known for their Emmy-recognized work (he for Frasier, she for various Ryan Murphy productions) -- as other films they partook in can attest to -- they're always a welcoming presence in a movie. (And again, they should be in another project together.)

Down with Love is an utter delight, a rarity amongst today's regular features. The quartet of actors work off each other wonderfully, again alluding to similar titles of the era the film pays homage to. Basically if you needs the movie equivalent of an antidepressant, you'll more than likely find it here.

My Rating: *****
Posted by MovieNut14 at 2:38:00 PM
Email ThisBlogThis!Share to TwitterShare to FacebookShare to Pinterest
Labels: 2000s, movies, reviews