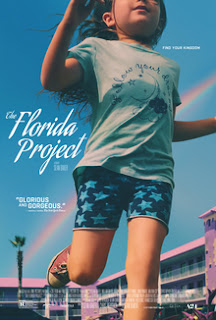 Childhood is something that's often cherished. Many times, however, the ugliness of what happens in that short period of life doesn't get highlighted in fiction. (The nostalgia filter is often quite effective to some people.)

Sean Baker's The Florida Project is a recent depiction of this time in life. Following Moonee (Brooklynn Prince) as she causes havoc, it's set at a hotel on the outskirts of Disney World. Her mother Halley (Bria Vinaite) more or less lets her runs unsupervised with her friends. Both causes headaches for hotel manager Bobby Hicks (Willen Dafoe) but how long until reality sets in for them?

Like his previous film Tangerine, Bakers focuses on an overlooked section of society in The Florida Project with the aid of newcomers in the main roles. (Perhaps a recurring theme for his later works too?) Eschewing the glamour of the average film and its process, he's obviously more interested in those who've tried to achieve the American dream and failed.

And similar to Tangerine, The Florida Project has its ancillary characters have as much personality as the lead ones. (Only good writers make sure of doing that, and thankfully Baker is one such person.) This isn't just about Moonee and her antics; it's also about the people she encounters.

The Florida Project continues to prove Baker's worth as a director. With his two most recent films, he avoids any flashy elements usually found in your standard Hollywood picture in order to stay modest with his work and humble in his storytelling methods. Hopefully his career stays on this trajectory in the years to come. (It's not too much of a stretch to say Baker's shaping up to be the next John Cassavetes, is it?)

My Rating: ****1/2
Posted by MovieNut14 at 2:40:00 PM
Email ThisBlogThis!Share to TwitterShare to FacebookShare to Pinterest
Labels: 2010s, movies, reviews