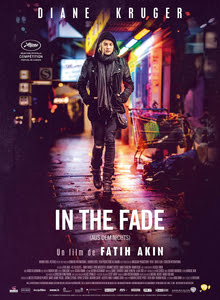 Early on in Fatih Akin's In the Fade, it's established that Katja Sekerci (Diane Kruger) has a charmed home life. Her husband is a reformed drug dealer (they were married when he was in prison) and they're raising a son together. Nothing could go wrong in Katja's eyes.

And then it does. A bomb goes off in front of her husband's office, killing him and their son. In her grief, Katja sinks into a dark depression. (She attempts suicide at one point.) Will she be able to find both justice and peace of mind?

Sure, we've seen countless depictions of life after loss before In the Fade. But what Akin chronicles is decidedly much darker than, say, Manchester by the Sea. (Then again, it is a German production...)

Kruger -- best known to many from Inglourious Basterds and the National Treasure movies -- makes her German-language debut in In the Fade. While she has gotten acclaim for her work here (she won Best Actress at Cannes), admittedly it's for a role we've seen done many times before.

In the Fade takes itself a bit too seriously to stay watchable. There are some good elements, granted, but they don't always mesh together well. Kruger is good but hopefully she'll get a better leading role soon in a more deserving picture. (She's certainly earned it.)

My Rating: ***1/2
Posted by MovieNut14 at 2:42:00 PM
Email ThisBlogThis!Share to TwitterShare to FacebookShare to Pinterest
Labels: 2010s, movies, reviews