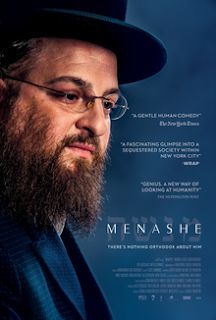 It's not easy to run a household by yourself. Society expects two people to maintain it: one to run it, the other to keep it running. But what if someone feels confident that they don't need a hand in such matters?

Joshua Z. Weinstein's Menashe follows the titular character (Menashe Lustig), who is somewhat of a pariah amongst his colleagues. He doesn't adhere to some of the traditions within the Hasidic Jewish community (such as the hat and coat the men often wear), the most glaring being not re-marrying after his wife's death. But he's determined to make a good life for his son Rieven (Ruben Niborski) by himself.

In contrast to other works revolving around Jewish characters, Menashe is more in-depth with the general culture of the religion. It's not presented as "oh, this character's Jewish" but rather as something important to said character. (And not as a punchline either.)

Also on display in Menashe is the attempts at single parenthood. (Rieven is under the care of the family of his uncle, his mother's brother.) Similar to Kramer vs. Kramer before it, trying to balance raising a child and surviving on a meager paycheck is far from the ideal situation. (Of course, it's single mothers that get focused more because what woman would willingly abandon their own flesh and blood?)

Menashe provides an unbiased glimpse into both a religion and domesticity. With his film, Weinstein captures the slightly chaotic life of one person as they try to restore order (with varying success on their part). And one can hope that this won't be the only time we see Weinstein at work.

My Rating: ****1/2
Posted by MovieNut14 at 3:06:00 PM
Email ThisBlogThis!Share to TwitterShare to FacebookShare to Pinterest
Labels: 2010s, movies, reviews