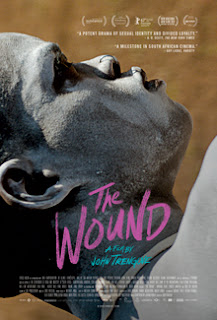 Usually with various foreign films, American viewers get more of a glimpse into the cultures of these countries. There's obviously more to those stories than the stereotypes Hollywood tends to present. (It's true, and you all know it.)

John Trengrove's The Wound is a particular example of this. Revolving around an initiation ritual in Xhosa culture, it follows factory worker Xolani (Nakhane Touré) as he serves as a mentor for pampered rich kid Kwanda (Niza Jay). But while Xolani is supposed to stay focused on his duties, he resumes his affair with Vija (Bongile Mantsai). But will the two men be found out?

Mind you, homosexuality is no longer considered an illegal act where The Wound takes place. (Other parts of Africa, however, aren't so lucky) so Xolani and Vija's affair isn't as daring as some might think. (Vija, however, is a married man with kids, hence his reluctance with being open emotionally with Xolani.) And the presence of Kwanda merely complicates things further.

But like many queer films from years passed, the weight of shame in one's identity weighs heavily in The Wound. Neither Xolani or Kwanda are ashamed of who they are but Vija is a different matter. That internalized homophobia is by no means an unfamiliar aspect to works like this but in this day and age, haven't we seen it enough?

Anyway, The Wound falls victim to the standard tropes regularly found in queer fiction but it excels in depicting an initiation that's unknown to much of the outside world. We've seen other rites of passage before (bar/bat mitzvahs, baptisms, graduations) so this is a decided change of pace. Hopefully we'll be seeing more of Trengrove's work in the near future.

My Rating: ****
Posted by MovieNut14 at 12:04:00 PM
Email ThisBlogThis!Share to TwitterShare to FacebookShare to Pinterest
Labels: 2010s, movies, reviews