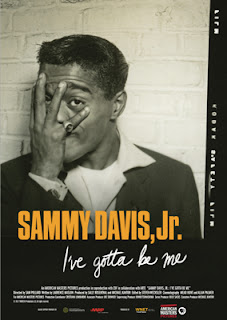 There are those whose purpose in life is known early on. Some may be destined to further the field of medicine, other might display an interest towards the arts. In the case of Sammy Davis, Jr., his career path was simple: to be an entertainer.

Sam Pollard's Sammy Davis, Jr.: I've Gotta Be Me follows the path of Davis' career from his early days in vaudeville to being a member of the Rat Pack to making a name for himself by his lonesome. But being a black (and later Jewish) entertainer in the early days of the civil rights movement was a feat easier said than done.

The documentary focuses primarily on the professional hurdles Davis faced, the personal ones serving more as a footnote. (His romance with Kim Novak and then-controversial marriage to May Britt are briefly highlighted.) By many means did aspects of his life hamper the progress of his career but at the same time, said aspects had him breaking barriers.

Nevertheless, he persisted with his career ambitions. Pollard shows how there was hypocrisy within society and show business more than half a century ago. White performers could don blackface without a second thought but Davis was regularly talked out of doing his dead-on impressions of movie stars like Humphrey Bogart and James Stewart. (Davis also wasn't allowed to attend John F. Kennedy's inauguration gala -- Kennedy's father didn't approve of Davis' then-engagement to Britt -- but Nat King Cole, Sidney Poitier and Harry Belafonte were.)

Sammy Davis, Jr.: I've Gotta Be Me depicts a man who -- depending on the decade -- was either ahead of his time or painfully out of touch with it. But regardless of how the culture at the time perceived him, it was very hard to deny his talent. And that's still the case in the years since his death in 1990.

My Rating: ****1/2
Posted by MovieNut14 at 10:48:00 AM
Email ThisBlogThis!Share to TwitterShare to FacebookShare to Pinterest
Labels: 2010s, documentaries, reviews