Joan Didion: The Center Will Not Hold 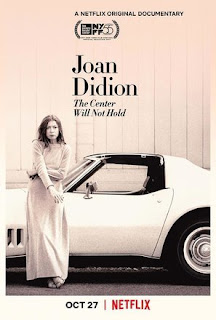 How much of one's life and their work can be told? There are the dark periods that they would prefer to avoid, and there are the happier times they've revisited in later years. Regardless of what they've encountered, everyone has a story waiting to be told.

Take for instance Joan Didion. Here's someone who rose to prominence as the world's many facets began to change, and she was right in the center of it all. From the rise of the counterculture movement to the Manson trial to the shift in political power, it would require someone who knows Didion closely to capture her life's accomplishments. And who better to do such a task than her own nephew?

Griffin Dunne's Joan Didion: The Center Will Not Hold focuses on the writer's work and existence, how she captured the changing world she's a part of. He captures his aunt as someone who saw society constantly on the verge of destroying itself. (She's not wrong.)

Also on focus in Joan Didion: The Center Will Not Hold is the subject of loss, something both Didion and Dunne are all too familiar with. With her losing her husband and adopted daughter in a matter of two years (and he losing his sister back in 1982), the wounds of the past still linger for both of them. (Time doesn't always heal all wounds.)

Joan Didion: The Center Will Not Hold is more than just a portrait of her as a writer; it's a portrait of her. She's a woman whose social circle and influence have a wide reach amongst both the famous and the anonymous. Here's someone who has an opinion on the world and if anyone didn't like it, to hell with them.

My Rating: ****1/2
Posted by MovieNut14 at 8:42:00 PM
Email ThisBlogThis!Share to TwitterShare to FacebookShare to Pinterest
Labels: 2010s, documentaries, reviews