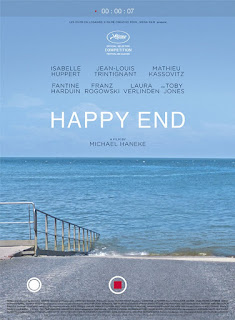 It's very clear how to distinguish a film by Michael Haneke from any other. Many times his works cross a certain line, other times they do a merry jig on said line. And boy, his latest film Happy End does the latter many times over.

A sort of sequel to Haneke's earlier film Amour, Happy End depicts a deeply dysfunctional family: a patriarch who attempts suicide repeatedly, a fractured mother-son relationship, a son with a wandering eye, and an emotionally distant granddaughter. And that's just the half of it.

As he showed with Funny Games and The Piano Teacher, Haneke makes it clear he's morbidly fascinated by what makes a person tick. (The opening sequence of Happy End grimly verifies that claim.) Why do some people behave the way that they do? Haneke doesn't provide a clear answer but no matter. Just enjoy the mayhem as it unfolds.

But much like Code Unknown, Happy End is more of just depicting life as it happens. It's not something that's always fair to some people nor is it full of the expected routines. More often than not, it regularly deals out some hard knocks to most of the people in the world. (Hey, just watch the news.)

Happy End is most definitely a Haneke film. With a dark interest towards human behavior, he explores society in an emotionally numbing manner -- as he is one to do -- to the point where wants to look away but can't bring themselves to do so. And it's probably safe to say that the last scene is the most audacious thing Haneke captured in any of his works.