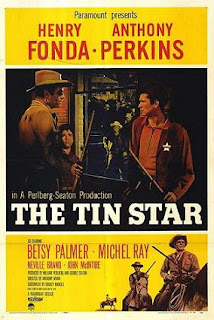 Early on in Anthony Mann's The Tin Star, bounty hunter Morg Hickman (Henry Fonda) arrives in a small town hoping to get a claim on a wanted man. His first impression of sheriff Ben Owens (Anthony Perkins) isn't a good one; he finds the younger man fumbling with his pistols. ("Just getting the feel of these guns.") This sets up the characterization of the two men.

And the casting of these two actors amplifies the circumstances of The Tin Star. Fonda is the more experienced actor, his Morg having a world weary attitude about him. Perkins -- having been in only four films prior to this -- has a green streak about him, much like Ben. And these are traits that would persist in their roles for the next decade.

Back to The Tin Star itself. Mann is certainly no stranger to this genre as his collaborations with James Stewart earlier in the decade can attest to. This was the genre that ensured Mann would not be forgotten years after his death in 1967. (Well, film noir too.)

Unsurprisingly, The Tin Star shares many elements with other westerns of the era: Morg romancing the widow, Ben's wife being concerned for her husband's safety, Lee Van Cleef as the villain...you know, the usual. (But hey, if the audience likes these tropes, give them what they want.)

The Tin Star is an enjoyable yarn from a year filled with heavier-themed films. (Fonda and Perkins also had 12 Angry Men and Fear Strikes Out that year.) Being released the same year as other westerns like 3:10 to Yuma and Gunfight at the O.K. Corral, it's understandable as to why it's not as known. But that shouldn't stop one from seeking it out.