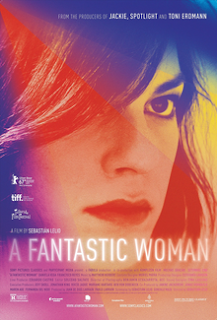 When trans people actually get recognized in fiction, two infuriating things tend to happen within a majority of them: either the extent of their storyline is about the fact they're trans (rather than them living their lives) and/or they're played by cis actors. Is it that hard to tell their stories?

Sebastián Lelio's A Fantastic Woman is a welcoming entry for such a subject. Marina (Daniela Vega) goes through a great ordeal following the sudden death of her lover Orlando (Francisco Reyes). She barely has time to grieve before the police suspect the death was possibly foul play. And Orlando's family -- save for his brother -- view Marina as an abomination.

The story Leilo presents in A Fantastic Woman is not about Marina's transition but rather just Marina. It's not interested in her past but instead her future. Will she find peace after Orlando's death? (In short, this is a film about life itself.)

And Vega herself lives up to the film's title. Even when faced with brutal transphobia, she maintains an unwavering display of dignity. That's what makes her stand out among other trans performances; she flat-out refuses to be ashamed of who she is.

A Fantastic Woman can be a hard watch at times (no one regardless of how they identify should ever go through what Marina endured) but Leilo provides an engrossing story. As he did with his previous film Gloria, he captures a woman at a certain point in her life, how she embraces it, and vice versa. And hopefully, Vega will have a lasting career full of in-depth roles like Marina.