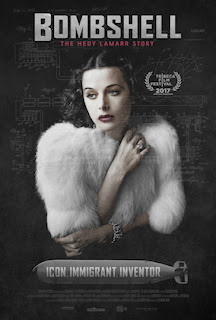 There's no denying the fact that women often get the short end of the stick (so to speak) in many aspects of life. Granted, within the last thirty years or so, (some) changes have been made towards the course of gender equality. But that doesn't rectify the past entirely.

In fact, there are numerous examples throughout history where a woman's contributions were either disregarded or flat-out ignored altogether. Mary Anning was a crucial figure in the field of paleontology but wasn't recognized as such until after her death. The same can be said for Rosalind Franklin and Cecilia Payne, both of whom made scientific discoveries that others (read: men) took credit for. And what can be said of Hedy Lamarr?

Many associate her as the gorgeous leading lady from Hollywood's Golden Age (or the inspiration for a running gag in Blazing Saddles). But as Alexandra Dean's Bombshell: The Hedy Lamarr Story shows, there was so much more to Lamarr than her looks. She was a deeply complex woman, one whose mind was constantly in overdrive. But how overshadowed by history was she?

Fittingly because what she had created, nowadays people are aware of Lamarr creating the basis for WiFi and Bluetooth during World War II. (She didn't get proper credit until shortly before her death in 2000.) For years since co-patenting such an invention, she didn't know that she could renew said patent after it expired (she found out years after the fact). Still, at least she didn't go to her grave feeling she achieved nothing outside of making movies.

Bombshell: The Hedy Lamarr Story shows there was much more to the movie star than her stunning (and oft-copied) beauty. She was a woman who was unfortunately born into a time of rampant sexism (and anti-Semitism) but thankfully such respect was restored to her and nearly two decades since her passing, it looks to be staying put. (And rightfully so, too.)

My Rating: *****
Posted by MovieNut14 at 10:47:00 AM
Email ThisBlogThis!Share to TwitterShare to FacebookShare to Pinterest
Labels: 2010s, directed by women, documentaries, reviews