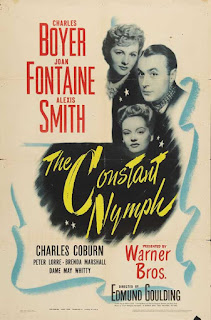 Infatuation is a fickle thing. Many tend to mistake it for actual love and boy, Hollywood is no exception. It can be applied to a number of genres, all with varying results. But it's particularly prevalent when the Hays Code was still in effect.

Take for instance Edmund Goulding's The Constant Nymph. Tessa Sanger (Joan Fontaine) is deeply smitten with struggling composer Lewis Dodd (Charles Boyer). In many close-ups of Tessa, we how bright her features become when she's talking about Lewis or when he's talking to her. But she has to put on a brave face when he marries her cousin Florence Creighton (Alexis Smith).

Admittedly the idea of Fontaine (who turned twenty-six in 1943) playing a fourteen-year-old is a bit of a stretch but she's very good as the besotted Tessa. In fact, what she does in The Constant Nymph is very similar to what she'd do in Letter from an Unknown Woman five years later. (It wouldn't be surprising if Max Ophüls cast her in his film because of this one.)

Goulding is no stranger to melodrama. Having previously made Dark Victory, he's familiar with capturing the mercurial nature of life. (He would later do the same with The Razor's Edge.) Tessa watches from afar as Lewis lives a comfortable life with Florence. But (perhaps) unbeknownst to her, it's not a happy union. Will she find her own happiness?

The Constant Nymph is the usual fluff of the era but it's enjoyable fluff. Fontaine and Boyer (as the latter is prone to do in most of his work) connect very well in their scenes amid some solid supporting players. (Peter Lorre!) If only they had done another project together.