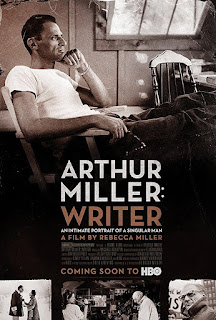 There's a certain way that people are perceived by others. Some are viewed by their personalities while others know them for how they behaved behind closed doors. But one thing that tends to persist is how one person is portrayed by their own family.

Rebecca Miller's Arthur Miller: Writer depicts the famed playwright as how he was in the comfort of his own home. Using footage from previous attempts at making a documentary, Miller captures her father not as someone filled with anger (like many of his plays are) but rather as a human being.

Miller chronicles her father's early life of privilege (before the Great Depression struck), showing how such an upbringing actually kept him humble in later life. Of course moments where he's thrown into the public eye (the House Un-American Activities Committee and his marriage to Marilyn Monroe) put a strain on his otherwise private lifestyle. Regardless of the circumstances he was in, he remained modest.

But that's not to say he was perfect, far from it. Despite his initial success with All My Sons and Death of a Salesman, his plays (The Crucible and A View from the Bridge aside) never really seemed to connect with their audiences. (The critical reaction to After the Fall was beyond scathing.) But apparently to him, positive reception to his work wasn't of immense interest to him; he just wanted to have his voice heard.

Arthur Miller: Writer shows the dramatist as the very thing his works' main theme was: human. Miller encapsulates her father not as one of the most acclaimed writers of the last century but instead as the average American citizen. Sure, there's a sentimentality to the project but hey, it is essentially a daughter remembering a departed family member.