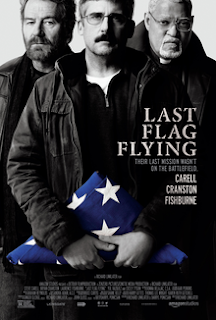 In the years since the 1973 release of The Last Detail, there have been a number of other works pertaining to those in the military. Some with soldiers in battle, other with them back on the homefront. Regardless of the location, the effects of the fighting can have lasting impressions.

Richard Linklater's Last Flag Flying serves as a sort of sequel to The Last Detail (names are changed), that sense of disillusionment still lingering after all those years. And certain wounds are re-opened as Larry "Doc" Shepherd (Steve Carell) asks for help from fellow Marines Sal Nealon (Bryan Cranston) and Richard Mueller (Laurence Fishburne) in retrieving and burying his son, who was killed in Iraq.

There's an amusing element to the lead actors of Last Flag Flying. All three were nominated for playing real-life figures who were famous for the wrong reasons (Carell Foxcatcher, Cranston Trumbo, Fishburne What's Love Got to Do With It) so seeing them as more human characters might seem odd to some. (Then again, considering Carell and Cranston's more famous TV roles...)

All three actors are great in Last Flag Flying but special mention goes to Carell. Here's an actor who made a name for himself starting as a correspondent on The Daily Show and later on with The Office so having him in a role that doesn't have him as loud and boisterous is a pleasant touch. (Then again, he did such a role in Little Miss Sunshine but that was before Carell made it big.)

Last Flag Flying shows that Linklater is more than capable of working with someone else's work. (He co-wrote it with Darryl Ponicsan, who wrote the source novel.) In contrast to the more lax attitudes in some of his other films, Linklater proves he can handle the somber stuff. (Only time will tell if he continues with similar projects.)