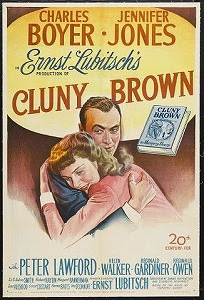 "There was nothing important going on in London on a quiet Sunday afternoon in June 1938. The most exciting event of the day was Mr. Hilary Ames' cocktail party --- and even that was exciting only to Mr. Ames." So begins Ernst Lubitsch's Cluny Brown. And it's at Ames' place where the titular character (Jennifer Jones) is introduced.

Many of the other characters find Cluny's behavior surprising (and not often in a good way) because she doesn't meet society's standards for being a lady (she's deeply interested in plumbing). Adam Belinski (Charles Boyer), however, finds Cluny endearing. And from there, the hijinks ensue.

This being a Lubitsch film, Cluny Brown takes a lot of potshots at how class is perceived as a whole. A number of supporting characters don't deny that how they're viewed by others is crucial to their well-being. But with Cluny and Adam, that's not their main concern; they just want to lead happy lives.

Both Jones and Boyer have had their fair share of more serious works prior to Cluny Brown (she with The Song of Bernadette and Since You Went Away, he with Gaslight and Hold Back the Dawn) so it was an interesting move on Lubitsch's part. Though not the usual fare for the two actors, they have solid comedic timing and chemistry together.

Cluny Brown was a fine note for Lubitsch to go out on. (He passed away the following year.) Its two leads may not have done another film together after this one but their time together in this results in a one-of-a-kind treat. (Speaking of which, why didn't they reunite on screen? More than likely that Jones' future husband David O. Selznick might've had some part in that.)