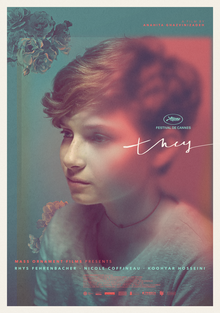 Sexuality and gender identity have many facets but fiction often focuses on the basic ones. The ones that often get the spotlight are gay (usually white men) and trans (again, usually white), and they almost always are focused on young adults. Very rarely are such stories revolved around either a different identity or age demographic.

Which is why Anahita Ghazvinizadeh's They provides an entry for both categories. Taking within a three-day period, it follows J (Rhys Fehrenbacher) as they go through their usual routines. Under the supervision of their sister and her fiance, they try to figure out who they are.

What makes They different from other queer films involving children is how welcoming it is towards J. Sure, there's the rare pronoun slip-up but they're rectified as quickly as they're uttered. How often do you see such acceptance towards one's identity in fiction?

What also makes They stand out is that J's whole arc isn't solely focused on their identity. (They're asked to make a decision about their potential transition at the start of the film.) Their being is more than where they fall on the gender spectrum; the film's more than content with depicting how they live.

They puts the spotlight on an identity the media more often than not tends to ignore. (Maybe it's out of graciousness for those not familiar with it?) Ghazvinizadeh keeps a non-discriminating air about the whole project, which in all honesty should be on display more in queer fiction if its creator is cis and/or straight; they don't generally need to understand such identities but accepting them is crucial.

My Rating: ****
Posted by MovieNut14 at 1:19:00 PM
Email ThisBlogThis!Share to TwitterShare to FacebookShare to Pinterest
Labels: 2010s, directed by women, movies, reviews