BOOK VS MOVIE: To Kill a Mockingbird 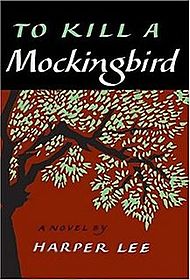 With the releases of Harper Lee's sole novel To Kill a Mockingbird and Robert Mulligan's film, they raised questions about one's beliefs towards race. Also bear in mind both were released at the beginning of the civil rights movement.

The fact that it's told from a child's point of view gives the audience a sense of naivete. Scout, the narrator, is as unclear of the many events in Maycomb as much as the audience. Apart from the folklore surrounding him, no one knows much about Boo Radley. Scout, as well as us, barely knows of the case her father Atticus is defending in until the actual trial.

That's what makes Lee's writing so effective. We learn of major points in the story when Scout learns of them. And if you're wondering about the significance of the title, Atticus mentions that "it's a sin to kill a mockingbird." (Mockingbirds are mentioned as symbolism for innocence.)

Mulligan's film is just as great as Lee's novel. There are only a few minor changes, but Horton Foote's script stays true to what Lee originally wrote. You just can't imagine anyone else but Gregory Peck as Atticus Finch. Seriously, you just can't.

Now comes the challenge of choosing which is better. It's really hard to say, even with a metaphorical gun to my head. In all honesty, I just can't. Both the novel and the film have their own certain qualities, hence the challenge.

What's worth checking out?: I'd go with both.
Posted by MovieNut14 at 9:28:00 PM
Email ThisBlogThis!Share to TwitterShare to FacebookShare to Pinterest
Labels: book vs. movie, director: Robert Mulligan, reviews