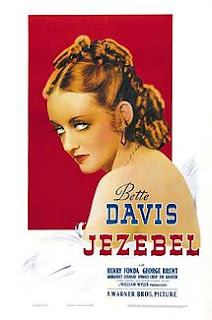 Bette Davis was and always will be a firecracker of an actress. She always made an impression on audiences, co-stars and directors (even if the latter two were mostly negative). Hey, she didn't get ten Oscar nominations and two wins just by being a good actress.

In William Wyler's Jezebel, Davis' character of Julie Marsden makes Scarlett O'Hara look like Melanie Hamilton. Her first scene alone proves it. She appears at a party wearing her riding clothes, gets a drink made strictly for the men, and basically shocks everyone there. You think they would rarely be surprised by Julie's attitude. It seems she's like this all the time.

Julie's fiance Preston Dillard (Henry Fonda) is one such person accustomed to her behavior. However, he has his limits with her. Particularly in one famous sequence. Julie causes a stir at a ball by wearing a red dress instead of the required white. Preston keeps his opinion silent, but it's clear he's furious at her decision.

As aloof and carefree Julie may seem, her emotions towards Preston are genuine. She cares more about him than anyone else, even herself. Even after he leaves her, she still holds a torch for him. (Well, not in the same sense of Scarlett with Ashley.)

Jezebel is really like a watered down Gone with the Wind, but not in a bad sense. After all, I find Julie much more bearable than Scarlett. (Yeah, I said it. What about it?)