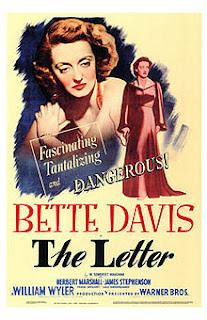 The opening moments of William Wyler's The Letter shows a scene of peace and serenity. And then, gunshots.

The shots were fired by Leslie Crosbie (Bette Davis). She vehemently claims that the shooting was in self-defense, and all evidence supports it. Everyone else believes her...well, almost everyone.

Many of the movies I saw Davis in had her in charge even with a personal flaw within her character. As Leslie, she convinces almost everyone that there was reason behind the shooting while at the same time hides some secrets of her own. It's a hell of a role for Davis.

Leslie is also very concerned on what others might think of her if the titular letter is revealed to the public. Of course, the whole outcome of the trial will be completely different than what she hopes for.

It ends with an expected Production Code-required ending, but The Letter is a hell of a film. As mentioned, Davis gives a powerful performance in it. Bear this thought as you watch it: looks can be deceiving.