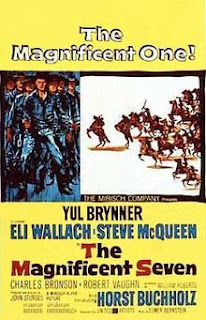 The funny thing with Akira Kurosawa was that sooner or later, his work was going to get remade just in a matter of years. I mean, just look: Sergio Leone gave Yojimbo a Western twist and called it A Fistful of  Dollars, and George Lucas set The Hidden Fortress in space and named it Star Wars.

And John Sturges turned Kurosawa's magnum opus Seven Samurai into The Magnificent Seven. What? A samurai epic made into a Western? Sounds ridiculous, but it works.

In anyone else's hands, this would've failed spectacularly. But Sturges made sure that the masses (and Kurosawa) were appeased. They were. (Kurosawa reportedly rewarded Sturges with a samurai sword.)

Sure, there are a few differences between Seven Samurai and The Magnificent Seven, but it doesn't matter much. All that matters is that Sturges gets the viewer's attention and keeps a hold on it until the very end.

Saying The Magnificent Seven is one of the best Westerns out there is barely scratching the surface. There are just so many aspects about it that make it work. My personal favorites are the ensemble cast and Elmer Bernstein's score. Who doesn't like either one of the two, or even the movie for that matter?